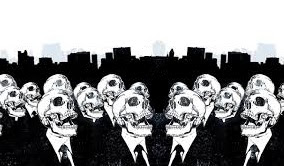 The fear of failure is probably the biggest psychological barrier ever known to personal growth. But know what? Just remove the “fear” part and what you have left is a most volatile fuel to fire up your personal revolution!

Curiously, failure is somewhat translated in the brain as a kind of “death experience”--- something to dread about...
This dread seems also to be quite more pronounced the more “social” the failure is --- or when the prospect exists that other people will know that you failed. This happens to be just as true even if no one actually witnessed the failure, like it's second nature for us to anticipate “damn, what will other people think!”

In effect, then, failure is a double whammy; Not only is failure a bitch; failure is also a wicked bitch, cutting you off --- on some emotional level --- with the rest of humanity. Irrational, I know but such is its power. Better not let it get the better of you.

Fear of failure, however, is just one of them bastards in the "fear" family. It is also the usual motive in many reported cases of senseless "crimes" committed by "dream killers" all over the world.

Don't get me wrong; I'm not saying all "fears" are bad. Some are legitimate and even desirable to have for they serve as warning signs for really bad things to come. Yet the truth remains, not all fears are created equal. Many are best discarded upon first sign that they are false alarms. If you insist on proving your fears to be valid, of course, you will end up finding supporting evidence to warrant belief: this is your crazy mind on self-defense mode against insanity. But if the truth is more important to you than proving you are right, simply remove the fear, your mind will likewise adjust and become open again.

Fear is only useful when true danger exists. And danger means "danger to you / your loved one's very existence" --- not any imaginary "danger". But you must master your fear such that it will not cause you to lose focus and rationality. The fear is supposed to signal the body to "get ready for action". That's why it's stressful. Thus when the danger is passed, or proven to be unreal, you must let go of fear and relax.

After letting go of "fear", you must let go of the "dread", that stinking "dread of death", that is. And no, they are not one and the same.

In my experience, at least, the battle gets a bit easier when you think of fear (especially "fear of failure"), as a two-headed monster. They take turns to grip you in suspended inhibition and inability to think and act --- sometimes for years on end!

There is, however, one simple remedy I found, and it's not even simple: just let go of the "fear of death".

Don't ask me how to do it. Just do it. Its more a decision actually than an act. Some would call it a "mental action" or even a "mental event". It can really be that epic, depending on your internal friction. But bottom line, it's really just a decision.

I used to think it has to be a "realization" of some sort, like an earth-shaking insight on the nature of life yadda yadda. In this case it's a cliche that saves the day --- "in order to really live, you must not fear death" But still, no amount of insight is more profound, and more effective, than that moment in eternity when you finally tell yourself  "to live or to die... I don't give a damn! I won't settle for less!"

Basically, you are on your own. (and don't use my script!)

Mark this mental event in your calendar. Its a milestone deserving of a bronze monument, never ever, ever forget.

Killing fear can be achieved in a single blow but it's better if you can train hard prior to the occasion.

You may use some mental kung-fu like psychological scaffold or devise an artificial disability. Ultimately, however, you must deal the death blow by solving real-life disabilities or problems. Do not fuss over not doing it perfectly the first time. You would get better with practice.

Good thing about life is that it is always filled with problems, so if you should be a master "fear slayer" soon enough.

When you're ready, you shall know it's time for the kill.