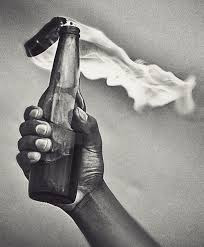 Every propagandist worth his salt eventually discovers for himself the dark art of plagiaristic “scaffolding” as a practical tool for exorcising writers block. Here's the magic potion that will make your brain immune from zombification in the face of a looming deadline: “google-copy-paste-rewrite!”

The idea behind this deadline-centric brilliance is of course to jump-start the writer's depleted creative juices by leap-frogging directly to the rewriting stage --- (which is where your shameless retrofitting craftsmanship morphs into inspired creativity). Before you know it, you have an original masterpiece in your hands, or at least something decent. (It simply won't work though, if you do not actually know how to spot good material to bastardize or you do not know how to do an effective rewrite.)

Outside the creative field, however, I realized that “scaffolding” becomes a veritable scepter of power when waged in pursuit of a personal revolution...


Let's digress a little. "To scaffold" literally means "to support". In home construction, scaffolding are temporary, rudimentary support for the act of building. Crude, cheap and weak. From these seemingly lowly scaffolds towering structures several thousand times stronger get built. Afterwards, the ugly scaffolds themselves are discarded, sometimes even thrown away.

So, how does this translate to personal development?

The idea is that through seemingly small and mundane activities, we get to build bedrock personality traits that serve as solid base for a satisfying and productive life.

My favorite example is long-distance running. There's nothing esoteric about placing one foot in front of another in quick succession over a 3-kilometer run. No but the mental and physical challenge to train for the race and run to the finish are proven psychological scaffolding you can use to firm up you perseverance. If you haven't done so already, you should try it at least once. Best result if you have at least a month of consistent physical conditioning.

When you passed your 3-kilometer test of endurance , you begin to accept that you can make it another 3 kilometers --- mentally at least, you just know this is an ultra-realistic possibility. Because mentally, the barrier you conquered is not a physical barrier nor even a mental-barrier but a faith-barrier, which is what your emotionally-charged disbelief really was. Having thus achieved a kind of spiritual triumph, on a subconscious level, your confidence for perseverance in other challenging areas of your life also gets a boost.

With that 3-kilometer physical barrier conquered, you now have "physical proof" that you too can conquer other challenges!

Suddenly, that new job you wanted feels not too far off, its only a matter of time and perseverance. That problem at the office no longer feels as stressful. That weight loss goal somehow feels more achievable. You just know it in your gut.

In having tasted your capacity for endurance, you begin to wonder "what else can I not endure?" That attitude is your ticket to an epic journey of personal revolution. It doesn't matter anymore WHY you fucked up in life before. From here on forward, you can rewrite your life's story the way you want it.

And whatever you do, don't loose that ticket, that psychological trophy of yours. Keep the internal pep talk burning. If you must, keep achieving little trophies in between major life victories just to tide you over; then somewhere along life's uphill highway, you will realize that unshakable confidence has become your habit . It has become a habit so hard to break, no amount of defeat can quash it.

But the journey doesn't end there. This unshakable kind of confidence will then become your new scaffold. With it you will scale mountains, conquer armies, build empires and generally make your life simply spectacular.