I was sure he was clueless at the time but my high school best friend Moses (not his real name!) taught me a great lesson in coolness when he kissed his mom in public one fateful afternoon. He was so casual about it and couldn’t care less who was looking that I actually felt embarrassed to be even there.

Minutes later, after we board the vehicle en route back to school, I asked him what has just happened in front of mine eyes hoping I could endlessly tease him about it. I was dumbstruck when he flashed a big smile and with a solemn masculine confidence confessed, “I’m a mama’s boy”. I tell you, that simple declaration created a minuscule crack in my juvenile universe that triggered an infinite crisis. 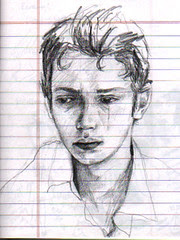 Who says it’s unmanly to express affection for your mom in the first place? And why deny mothers everywhere the affection they deserve from their male children just because of their gender? How on earth can boys develop a healthy respect for women if they can’t even appreciate their mothers who truly love them on a deeper, spiritual level?


I was thinking, “here, before me is a rare creature.. a mama’s boy with an attitude!” A rebel of sorts in fact against all the cheesy put downs by social conspirators who can’t stand anyone violating the feisty protocols of manliness.


With my new-found political cause, I dared go radical and started kissing my mommy on the cheeks publicly… for all her friends and my friends to see. It works like a charm. Everyone blushed every time but me. Pure magic.

Try it with your mom today and be part of a revolution! 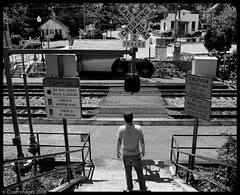 Image by * Photos by Chris M * via Flickr
Would you trade a life of security for a life of adventure?

DB's Adventuresome Advice had me painfully reminded about my own dilemma of the last few years. He narrated


"...how I left a secure and lucrative job as a radio announcer, which I had held for a couple of years, to go back into theatre. The life of an actor, for most of us, is about as secure as being out on the ocean in a row boat with no compass or chart and not knowing where the nearest land is. Nevertheless, that lack of security is the price paid for doing the work we love."

His actor friend on the other hand, took the road more traveled by of full-time job in a law firm and pursuing theatre only part-time, thereby missing a lifelong chance of building his dream career.

I thought its easy enough, to intellectualize this insight.. but I wonder what keeps people from jumping off into the unknown.. when that unknown represents the possibility of soaring beyond the clouds.

Is it lack of belief in the promises of life? Lack of self confidence? That all-too-human inertia? Lack of passion? Inhibition?

Or is it simply a value judgment, one that gives more weight to security than to possibility.

If this were so, then clearly no one choice is better than another. I can choose a secured life while you pursue an exciting life, and we'd both be equally right, so long as we are happy with our respective choices.

But then again, i would only be rationalizing. Deep inside, i still want to live my adventure. Deep inside i want to live beyond the limits of my own preconceived notions about life and about myself. I tell myself, I'm getting there but not yet.

In the meantime, I comfort myself in the thought that life is a question each of us struggle with. By living the question one day at a time, we journey towards an answer. An answer that makes sense to us. An answer that we ourselves distilled from the wine press of our personal doubts, dilemmas and experiences.

We may be influenced by society, religion, philosophy, and our own personal defects and weaknesses. In the end, however, the answer is ours to make or to choose. In this sense, I guess, life is a decision. A decision subject to revision as we go along but a decision nonetheless, out of our inviolable free will.

Man is basically a good and noble being generally, at least in my opinion and only under agreeable circumstances. Under extreme pressures, however, most people will crack, if not go temporarily insane, for such is the frailty that is human nature.

In the context of comfortable offices, lovely homes, promising careers and hilarious parties… talks about man’s innate goodness or tendency for evil is brushed aside as a mood spoiler. If I could have my way, I’d place this famous etching where the in-crowd can always see them…

Mealtime in the trenches In this ultra realistic etching by German artist Otto Dix, a lone soldier gulps down a hasty meal apparently indifferent to the human skeleton trapped in the frozen landscape beside him.

The work portrays not only the suffering that soldiers had to endure but also the ominous effect such conditions could have on a person's dignity. It springs from Dix’s intimate, if not carnal, knowledge of war and its dehumanizing effects.

In the 1960s Dix said, 'War reduces mankind to the state of beasts, with its hunger, vermin, mud and insane noises'. Who can argue with experience?

In his book “The Tipping Point”, Malcolm Gladwell explores how this human frailty operates even in less extreme situations. Calling it “the power of context”, Gladwell depicts how human behavior is strongly influenced by environment. How even little things, like the prevalence of broken windows in New York, could rouse an epidemic of petty crimes and general disorder.

In a world going crazier by the day, how humanity will fare?

The Bible speaks of darker times ahead; “tribulation such as has not been nor ever shall be” . Scientists likewise warn us that, one way or another, the world will someday end; i.e, through a lethal flu pandemic, global warming, a comet hitting Earth, the big crunch, black hole, or the explosion of our own sun. The possibilities for the end, it seems, are endless! 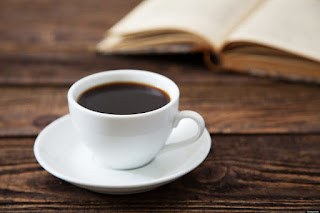 I'm a coffee lover and Ecclesiastes is my favorite blend.

Personally, I love Ecclessiastes' bitter taste, its downright cynicism, its in your face pessimism. It is guaranteed to make your mood gloomy or at least introspective with its harsh overdose of brutal honesty served hot straight from old Solomon's kettle.

I'm sure other Christians could relate to this special book in this way, even if they literally hate coffee. Realty bites and this book serves no lesser purpose than to serve reality as it is.
Newer Posts Older Posts Home
Subscribe to: Posts ( Atom )