It's all over the web.

The Philippine Supreme Court yesterday allowed Senator Grace Poe to run for president --- coinciding with the International Women's Day at that. (Makes you wonder the court must be keeping an editorial calendar too.) 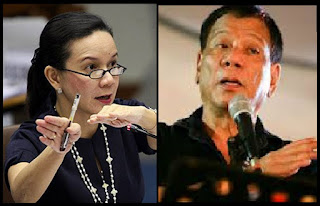 Some pundits say this development should put the 47 year old senator at the forefront of the race from now on. After all, she has managed to stay strong despite the uncertainty to her candidacy. Now that everything is clear and sunny, how else could she not win?

But things have changed a lot since before Poe's "fall from grace", in the ratings game.

For one, voters got see how Poe deal with real adversities. When shit hits the fan, the lady senator has not actually managed to retain her brand of intelligent lady boss confidence she used to display at the Senate hearings when she would grill unwitting "big fishes" to her well-oiled cooking pan. To some voters, Poe actually lost some of her confident "poise" midway in the heat of defense --- giving off a different impression  --- one that some voters may have found to be less than ideal for a president of a country besieged with so much bigger problems than her little crisis of candidacy.

The second effect of Poe's partial eclipse was that it gave opportunity for other candidates to shine brighter. Okay, actually, it was Mayor Rodrigo Duterte who clearly benefited most. From bottom dweller, he is now second in the surveys.

Duterte's numbers are trending up while Poe's were struggling to maintain hold of the top post. If recent presidential election history is to serve as basis, it's tough being at the top. Ramos upended Miriam's monolithic dominance by a slight margin. And even the very popular Erap sustained a significant downturn in popularity towards the end of his campaign..