The Joe Vizcarra » FAITH » TO LIVE IS TO BELIEVE

TO LIVE IS TO BELIEVE 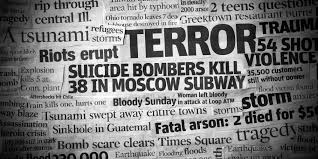 Every living organism is transitory yet all life is locked in a state of struggle to the death.

Every day, to be alive means to fight for survival, for victory, for domination, for retaliation, for self-preservation and self-mastery. You either fight to live, or you live to fight – until the day you die. This is the inescapable warrior’s journey.

Then finally, or suddenly, comes time to die...

Being the seasoned fighter and wise warrior, however, not even the abominable venom of death can poison a journeyist's spirit. And so, with one final breath of self-satisfaction, he finds it amusing, to celebrate his greatest moral victory.

The journey is finished.

The naked reality of death, however, is veiled in denial these days. Although death happens daily everywhere, people relish the illusion that death is a far away country. They party in the delusion that death is something that only happens to other people. Instead of facing the reality of death in courage and humility, death is pedestalized in dread -- a holy status it does not deserve.

For all this denial and mental evasion, people end up becoming a ball of emotions who are virtually susceptible to every imaginable lie: such as Hollywood propaganda, consumerist fears and fantasies passed off as news, promiscuous ethics of celebrities, down to the ruses of seductive predators whose desire is to turn them into their dastardly drugged bastard love slave.

Rather than manning up like upright warrior-kings of old, many men chose instead to go fashionably pathetic and live a life of glamorous fakery, seemingly addicted to insecurity, self-doubts and anxieties. Whoring their soul just to earn crumbs of approval from practically everyone, their sense of pride sunk so low a stinking maggot could sneer and pee at them.

Psychologically emasculated since grade school, they are simply unable to wrestle their way through their self-made emotional holocaust. All they could do was curse the high heavens for their miserable, shitty existence.

This blog is predicated on the proposition that the elegant way of the journey-warrior is the more sensible way to live – at least, compared to any of the sick modern lifestyle artificialities  people are brainwashed with. Retrofitted to contemporary urban context, where the daily battleground is invisible, or drastically shifted inward; a warrior of a man must consciously do battle as a journeyist, a master of the inner game; or else drift through life disoriented, a victim of imaginary circumstances.

While anyone can nurture a warrior mindset, I believe the journeyist streak is more particularly coded in the masculine instinct. Every man who has ever manned up to any significant real-world challenge knows this, if vaguely. Especially true in extreme emergencies when death suddenly loses its meaning. In the ensuing calmness of your being you begin to hear an inner warrior roaring inside, screaming a primal battle song you never thought was in you all along.

There and then, in the microseconds when the stench of death envelops your very skin, you finally learn what fits of moral strength you are made of. Suddenly you are unafraid and you very clearly know why. Surviving the episode, you vowed that this strength shall survive too in you for the rest of your life.


(Well, of course some "men" chicken out or fake out big time but this post is no place to talk of cry babies and sissy boys. Maybe they'll man up someday, maybe never.. the f... do I care!)

Depending on the intensity of their experience, some men actually forget their battle song just as soon as the smoke of emergency is gone. Others remember but inevitably forget under duress of their soul-stealing workaday world, woe to them. Then there are the strong minded ones, who simply refuse to let the song fade;  the proverbial assholes who would rather raise hell than forget.

And then there’s me, adamant pathfinder, trapped in the quagmire for years in search of a no-nonsense escape route only to jailbreak accidentally, in desperation, through the very backdoor "they' made you dread about.

This blog is dedicated to those who might still be in that place, trying to get out.