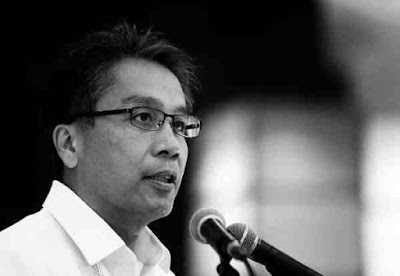 Philippine Senator Manuel “Mar” Roxas is no longer seeking the presidency in 2010.

In a packed press conference at Club Filipino yesterday, Senator Manuel Roxas announced he was giving way to the candidacy of Benigno "Noynoy" Aquino III.
Roxas admit it was the “most difficult” decision he had to make in his entire life and noted he did it to preserve unity of the Liberal Party and the country.

"I choose to lead the unity, not division,” he said. “As party president, I made the decision. I love the Liberal Party. My father founded it,” Roxas said.

On Monday, Senator Francis Pangilinan had appealed to Roxas to give way to Aquino should the latter decide to run for president. Pangilinan was also willing to abandon his own plan to run for vice president for the sake of party unity.

Calls for Aquino to run for president or vice president started mounting a few days after the funeral of his mother former President Corazon Aquino. Having no previous plan to seek higher office, Senator Aquino was understandably hesitant to accept the challenge, especially since the candidacy of Roxas and Pangilinan was already months in advanced preparations.

Up until yesterday, Aquino has never given any definitive indication of his political plans. Today, however, he is expected to make that announcement, fueling anticipation by his supporters, especially on facebook, that this would be IT.

Roxas made up his mind after long talks with Aquino over the weekend. "We agreed: ‘Let us forget about ourselves for a moment. This is not about us. This is about our people and our country. This is about our common dream, the dream of our parents’,” he said. And quickly added, "but let us not remain a country of dreamers. Let’s act now.”

Following their gesture, I must admit Roxas and Pangilinan has just earned my respect. If more Filipino politicians could follow their lead, then there may be hope for the country yet. =)

Label: IN THE NEWS , PEOPLE