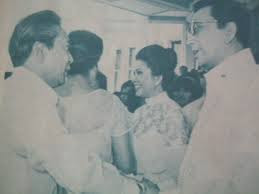 While I may condole with Iglesia ni Cristo friends and foes who mourn the loss of a man they deeply respect, I just can't get my mind off the faces of politicians who just can't miss being where the action is.

Damning their best to become the epitome of grief, the rest of the Filipino nation knows all to well why they are there. While them politicians grieve the passing of Eraño, they feel they should grieve more if Eraño's successor would count them among the politically dead. It's a political imperative that they should be there.

As can be expected the death of Eraño Manalo has triggered a most predictable avalanche of apparitions by politicians of all brands, shapes, sizes and colors. They swamped like crows to Diliman to pay their last respects to the man who led a religious organization fabled for its legendary bloc voting schemes.


A politician said to be close to the Manalos, former Bulacan Congressman Willie Villarama, believes that..


..politically, those who will be disadvantaged by Ka Erdie’s death are the politicians “who have long historical ties with the INC.”

The likes of Imelda Marcos and her son, was understandably sober and I believe they are sincere. Missus Marcos indeed cried as she recalled the deep friendship between Eraño and her late husband, ousted former president Ferdinand Marcos.

“Especially when Ferdie was just a new president, he would often seek Ka Erdy’s wisdom on many things. Ka Erdy and Ferdie were friends and as I remember those days, I cannot help but shed tears for Ka Erdy’s death. He was a good man, a very good man,”

Who could forget such a friendship, indeed? I hope no Filipino who truly cares for his nation's future will ever forget that friendship. I hope volumes will be written about it, analyzing the anatomy of where that friendship has led the nation.

The day following Imelada's visit to Diliman, she announced her dream that she wants her son Ferdinand "Bong Bong" Marcos Jr.to run for president. Not in 2010 mind you, but someday. I wonder where she found the inspiration to be so confident?

Some friendships, like financial investments, it would seem, do last beyond the grave and serve as ghost for the living.