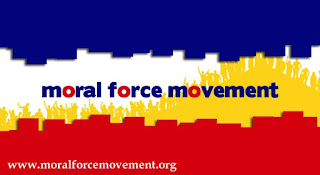 Highlighting the Moral Force Movement’s avowed mission, Puno called on the people “not to elect anyone who bribes, cheats, lies nor [to tolerate] anyone who does.” Volunteerism was his battle cry and thus enjoined every concernmed citizen to “..not just stay neutral in this fight, for the surest way to lose a fight against evil is through the conspiracy of silence.”


As yesterday's Inquirer editorial, however, points out, it seems Puno’s movement lacks a practical way for ordinary citizens to join the crusade. It said:

But aside from the acts of volunteerism that the Moral Force Movement has specified, what else can its members and volunteers, both actual and potential, do? This is where the movement still comes up short.

What struck me as somewhat fascinating is that another movement, albeit in the form of a media campaign, has already been enabling people with a simple formula for moral recovery, one that Puno could adapt or better yet coalesce with. The campaign is called Isang Araw Lang (Just for a Day). Launched several months ago by veteran TV personality and Mr. Public Service Daniel Razon, Isang Araw Lang is proving to be not just realistic, and therefore sustainable, campaign but one that is authentic, and therefore has potential for engendering enduring changes.

Unlike the Moral Force Movement, which emphasizes public virtue and accountability of elected officials, the Isang Araw Lang campaign emphazises private virtue and personal accountability of ordinary citizens. Unlike Puno’s movement, which seeks to compel changes from the top down by appealing to politician’s sense of shame, Razon’s campaign seeks to rouse changes from the ground up by appealing to the citizens innate decency and sense of moral obligation.

Isang Araw Lang advances the radical idea that one good deed, done even just for a day, by an ordinary individual, acting alone, can create a powerful impact. And this is so by the sheer moral gravity of the act. I call the idea radical because it doesn’t call for political organization nor mass street action to become a reality. All it takes is a personal moral resolve cemented with a virtuous act.

The ultimate potentiality of Isang Araw Lang is that those inspired to take up one good deed for a day will be so ennobled to do so again one more day and another. Now you don’t have to read Malcom Gladwell to realize how infectious a virtuous act can be especially in a society like ours which is victim to what the Inquirer calls, “an administration plagued by corruption scandals, contemptuous of the processes of accountability and seen as furiously maneuvering behind the scenes to perpetuate itself in power.”

Now I don't mean to say Razon's approach is better than Puno's. Far from it. I believe both movements compliment each other beautifully. To echo Inquirer’s question once again, “…aside from the acts of volunteerism that the Moral Force Movement has specified, what else can its members and volunteers, both actual and potential, do?”

My answer: Join forces with Isang Araw Lang and other grassroots movements similarly motivated, whose leaders walk their talk and exemplify in their person what their crusade is all about.