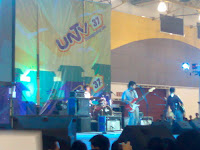 If you haven't been to World Trade Center in Pasay yesterday for UNTV's anniversary celebration, well don't despair because you may well have ended up among the hundreds of people who were not able to sneak in due to the mammoth crowd! (these initial photos courtesy of Tolits!)

As of 1 pm yesterday, crowd estimates at the WTC vicinity were at 30,000+ with several more people outside still trying to get in. For this alone, 3G is easily one of the most successful events ever to be held at Pasay City's WTC.
(Look at the size of that crowd!) ========>>> 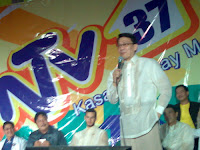 Kuya Daniel Razon took note of the overwhelming crowd response and hinted that next years anniversary celebrations must definitely be held in a much bigger venue! That is, of course, if the UHF station's viewers remained ardent supporters, to which the crowd readily cheered in approbation(!)

Countless guests showed up to give support and greet UNTV's audience. These include some of the country's best and hottest bands who provided the live and TV audience with endless rounds of musical entertainment.

Later in the day Bro. Eli Soriano's message was aired and, boy, for church members like me, it

sounded and felt every bit much like a state of the nation address except that the message was so much more important. Brother Eli briefly told of the church's efforts at going on air since the early 1980's. On just a shoestring budget and with just three people manning the production (himself, kuya Daniel and Sis. Luz) working 8 hours to produce a 1-hour bible program, which aired over government-controlled TV station IBC channel 13 (until a number of influential religious groups petitioned the government to have the program removed.)

Nonetheless, the church continued in propagating the Word hopping from one TV station to another until it found its present home at UNTV (which is owned by Atom Henares). The dedication of those early years remained intact today at UNTV with the church proudly airing the Word of God, as it is written in bible, as the core of its prime time shows... a feat no other religious group in the Philippines has done. Bro. Eli attributed all these achievements to the Almighty. "To God be the Glory!", he said.